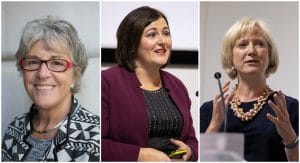 Rosalynde Lowe CBE studied to be a nurse and health visitor in Newcastle and Durham, and has worked at national, regional and local level in hospital, community and mental health services and primary care in a variety of nursing and managerial positions. She was Chief Executive of Hounslow & Spelthorne Community & Mental Health NHS Trust from 1997 to 2002.

Rosalynde has worked internationally as an advisor to the World Health Organisation and in Russia with the Moscow Red Cross. She chaired a review of the role of Health Visitors, Facing the Future, for the Chief Nurse and the Secretary of State in 2007. She has also been an associate fellow of the King’s Fund, an appointed member of the Audit Commission and a Governor of Brighton University. She joined the Council of the QNI in 2001 and served as Chair from 2002-2012. She was awarded a CBE in the 2011 New Year’s Honours List for services to healthcare.

Professor McArdle has served as CNO in Northern Ireland since 2013 and in recent years has overseen an expansion of partnership working with the QNI, including leadership development programmes for District Nurses in Northern Ireland and the publication of a District Nursing framework for the Province. Professor McArdle is a regular speaker at QNI events including the annual Conference and the Community Nurse Executive Network.

Ruth May, Chief Nursing Officer for England took up this leadership role in January 2019. She is accountable for providing the clinical and professional leadership for all Nurses and Midwives in England (with the exception of public health nurses) including the 350,000 nurses and midwives who work for the NHS. Prior to this she was Executive Director of Nursing at NHS Improvement for three years. Ruth has spoken regularly at QNI events including the charity’s annual Conference and Queen’s Nurse meetings.

I am so delighted and honoured to be nominated to receive this Fellowship. The QNI has been such an important and influential part of my professional life for so long, and it is wonderful to see how it has grown and flourished over the years. The QNI’s influence and leadership is needed now more than ever, and it is a huge pleasure and honour to continue to be involved in this dynamic organisation.

I am delighted to receive this Fellowship. Community nursing has a key role to play in achieving the WHO goal of universal health coverage and an important role to play in enabling a healthier society, as well as providing expert care.

Being made a Fellow is a real honour, having worked with the Queen’s Nursing Institute for many years. As the profile of community nursing continues to grow, so does the critical role the institute has in determining how we deliver community care in the future.

Our three new Fellows between them have made significant contributions to promoting the value, significance and leadership potential of nursing. Both Ruth and Charlotte have championed community nursing in their roles as Chief Nursing Officers working alongside practitioners and ensuring that the nursing voice is heard at the highest levels. Rosalynde Lowe has for many years worked to strengthen the role of community nurses both in the UK and abroad. She is credited with the transformation of the QNI into the modern influential voice of community nursing and I am delighted that she has been recognised by the Institute for her outstanding work.

The Fellowship of the QNI is normally presented in person at the charity’s Awards Ceremony in London. However due to the current pandemic the ceremony will not take place as planned this summer and presentations will be made at a future time to be confirmed

Back to News
Close